Paris, Paris, Paris what a weekend of long walks and climbing stairs over and over. I thought my legs were going to drop off. You were good to me, and I cannot wait till I come back and spend time with you again.

My first day was pretty easy going for me, took it easy and just relaxed into the city.  Took the Eurostar as it’s the easiest and overall cheapest way into the city.

I noticed a lot of things about Paris and the main thing for me was the metro; I saw there was a lot of graffiti and homeless people around and I felt so sorry for them. Also, the smell was horrendous! It smelt of urine and just unclean. Note to self: never complain about the state of cleanliness of the London Underground. There were a lot of buskers on the metro, and it got a bit wearing after a while.

I felt Paris was simply overpriced and for what reason I have no idea. For me, it was the food, and it grated me, maybe because I was on a budget, but I just did not like the prices. The only thing I was grateful for was my three-day travel ticket; I used it to the max to get my money’s worth.

A major bugbear for me was not being able to enjoy a majority of the attractions without someone trying to sell something. I understand why it is done, to make a living. But come on give me a chance to enjoy Paris’ landmarks before I am bombarded with selfie sticks, figurines, key rings and bottles of wine. Give me a chance to soak in the atmosphere, admire the landmarks and take in the people. Not to be harassed a minute after the last one.

I arrived at my hotel before check-in, I picked a hotel which was about 10-minute walk from the Eiffel Tower so thought I would take a stroll there and back to see what was around the area. I found the tower to be beautiful during the day, but I was looking forward to seeing it at night.

I would recommend seeing the Eiffel Tower at night; it looked beautiful. In general, Paris looked so much better at night when it was lit up. I took the option to go to the summit, and I was SCARED. I mean scared I have a slight fear of heights, I can do most things as long as I am dead in the centre and not too close to the edges in case I trip and fall. Nevertheless, it had to be done; there is no point going to Paris without visiting the tower. The approach to the tower was a breeze hardly any queues, what an illusion I thought I would not be faced with the dredged crowds. How wrong was I?

The Tower is beautiful at night, and I mean majestic I loved being within the Tower, looking from underneath and from afar. I can honestly understand why people go there, the views from the top are beautiful! It is a unique experience which I would recommend anyone doing at least once.

Hunt for food was serious. I was on the hunt for enjoyable but cheap food which was like a treasure hunt, and I wasn’t fussed about sitting in the restaurant. All I wanted was food on the go so I could carry on enjoying my trip.

Burger and Chips – £15! Not going to happen I wouldn’t do it at home so why would I do it next door in Paris, but have I become the traveller who converts the price of food to pounds and compare the prices to home instead of just enjoying the holiday.

In the end, I found a supermarket and filled up on salads and sandwiches with a cheeky kebab. Surprisingly, I was rarely hungry if anything mainly thirty and eager to see as much of Paris as possible. 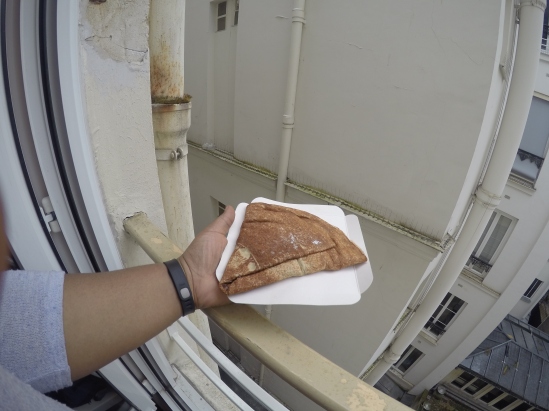 Noticed there were a lot of rude people. I am talking about plain rude, not waiting for you to get off the Metro before they got on, not saying excuse me but barging and being grumpy! But I refused to let them destroy my experience of Paris, so I became rude as well, and it made my experience a whole lot better and enjoyable.

The tour guide for Sandman was Agathe, and she was lovely, extremely knowledgeable and passionate about Paris which is always a bonus, which always makes the tour more enjoyable. 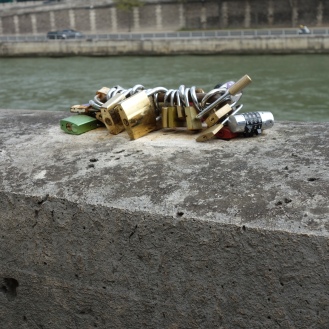 Hands down this was a fantastic hotel; it maintained such simplicity it worked. Whatever negative reviews people may have about this hotel I think they are a bit unjustified and unfair.

Breakfast in the hotel was for €8 which consisted of pastries, hot chocolate and juice delivered to your room.  When my meal came, my initial thought was this would not going to fill me up, oh how wrong was I, it did fill me up and left over for packed lunch whoop whoop.

Small things make me happy about hotels, and there were so many for this hotel, my main one will be the sockets. Yes, I said it, sockets. Their outlets were universal and also took USB. Honestly, I cannot say how happy this makes me. To be able to charge so many things at the same time.

I had booked a single room, and it was a room for one person. I have to admit it is a small room but when your only interest is to sleep, it being small is not a concern. 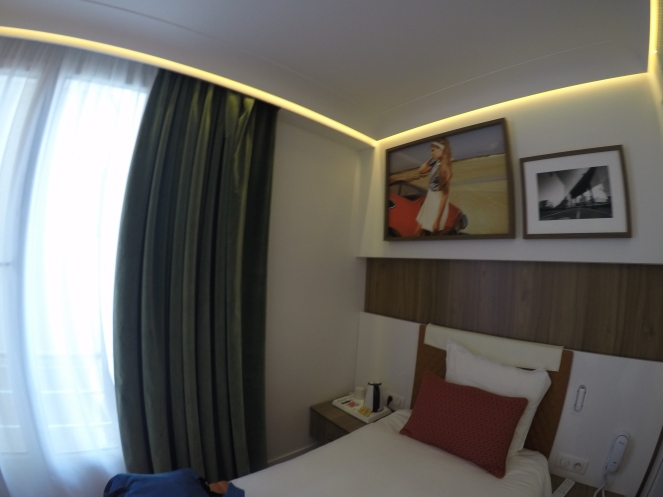 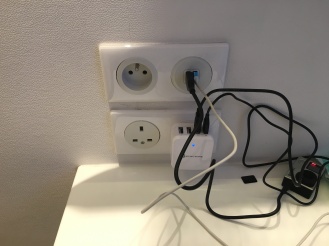 This was the first hotel which called me after check in to make sure I had settled in. This was a lovely touch, unfortunately for the person who called me I had fallen asleep and was a bit grumpy when they called. If you are reading this, sorry.

I am going to admit my French was horrendous, the most I could say was hello and thank you and the like. But hands down the hotel staff were patient and tried to help me with my French and encouraged me to keep trying which I appreciated. I would recommend everyone tries to speak a little French when in France it goes a long way and helps build a bit of rapport.

I should talk about how beautiful this arc is and how it is set on a roundabout with no street lines but cars were going round and crossing each other, but I am not. I am going to talk about how for the first time I felt uneasy and uncomfortable, and all my alarm bells started ringing. When I got to the Arc de Triomphe, it was around 8-9pm so it was pretty dark as I felt it was the best time to see it. I got there, and a man asked me to take a picture of him, which I did, and I asked him to return the favour and all of a sudden he became this guy who needed climb up on a ledge and all senseless things to take a picture. (The photos he took were awful). After he had taken the pictures, I said thanks and proceeded to make my way to the other side for a different, and he followed me I didn’t think much of it at first as the museum is in the underpass but then he asked if I was French. I lied and said “oui” and he realised immediately I was French and I admitted I was from London. He asked if I was alone and I said I was with my boyfriend (a lie) and he was waiting for me on the other side. I did not feel safe telling the truth, but he carried on walking with me. We got to the entrance to the museum, and I said I would be going in, and he proceeded to shake my hand which I accepted as a way of saying goodbye but he held on for one second too long. As I stood in the queue this man continued to watch me, and I had to tell him I will be a while, inferring get lost, and he finally took the hint. For the first time I was more aware of my surroundings than usual was, and I felt unsafe. My advice is if you ever feel uncomfortable or alarm bells start ringing inside your head. Listen. Stop. Think Quickly. React. Keep Safe. 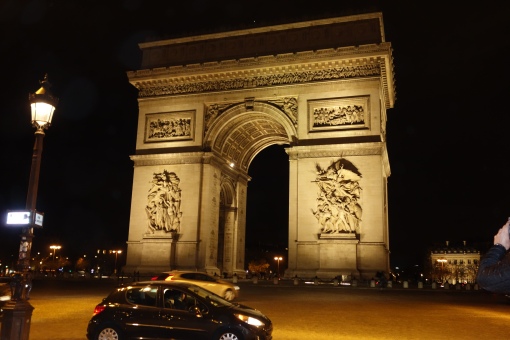 I made it my mission to visit eight landmarks/points of interest for my last day. I did not plan my route just what I wanted to visit and used the Paris Metro App on how to get to these places. I will be honest by the end of it I realised if I had planned it better I probably could have seen more as I was crossing over myself. But you know what, so what. I had fun either way and enjoyed every bit of it, used my metro pass, walked and climbed stairs and enjoyed every moment of it.

One of the points of interests which brought a tear to my eye was ‘Cimetière du Père Lachaise’ in the cemetery I noticed there was a man by a tombstone talking to his wife and other tourists was there just yapping away without a care in the world. Not mindful of this man who I could assume was having a conversation with his wife. I walked around the cemetery for roughly 30 minutes and came back to the same spot and noticed he was still there and there were even now more people having loud conversations. All of a sudden I felt guilty and ashamed of myself that I had come to this cemetery to look at the monuments, headstones and the like and forgotten some humans were mourning loved ones in their private time. For this reason, I will never be able to visit a cemetery to see famous people buried because of others who use it to mourn. 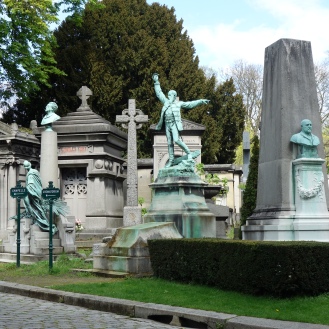 Would I go back? Yes

Why? The opportunity to learn my French and to use it. Plus I want to go with a BIGGER budget so I can go inside the museums